Having faith in the mission: the Ruby Emergency Response in Catbalogan City

A man carries the ActionAid foodpacks in Barangay Cagutsan for relief distribution.

The aftermath of the Typhoon Hagupit was a damp and bleak. Electricity was out and one could hear the chorus of generators across the city. Daylight was a blessing; nighttime was almost a curse—streets were only lit by the lights coming from passing vehicles and stores relied on candles and emergency lights. It was as if the whole town was deserted.

The rains though, didn’t stop the team from Balay Mindanaw to respond to the needs of the people in the Barangays of Mombon, Cagutsan, Cinco and Rama. These island barangays belong to the greater Siera Group of Islands located an hour away from the mainland of Catbalogan City. Composed of seven island barangays, the islands is regarded as one of the tourist spots in Catbalogan City.

Barangay Cagutsan residents waiting patiently for the distribution to start.

On the relief operations held on December 16, 282 food packs, 846 water bottles and 282 hygiene kits were distributed to Barangay Cagutsan. Although, there are still 18 remaining food packs, 52 bottles of water and 12 sets of hygiene kits were stored at the CSWD warehouse for the use of the LGU of Catbalogan.

From left: Tecson Lim of the city government of Tacloban, Mayor Tan of Catbalogan City, the former mayor, and Punong Barangay Lomuardo of Barangay Rama confering on the relief operations activity for the day at Catbalogan Pier II.

The food packs contained the following:

On the other hand, the hygiene kit contained:

Moreover, 3 bottles of 4 liters of water were also provided for every household in every barangay. 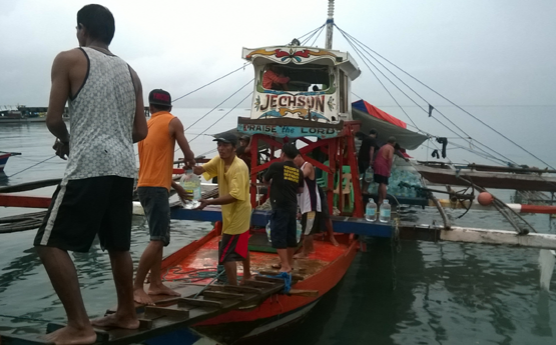 Loading of relief goods onboard at Catbalogan Pier 2. The boat will later on have engine difficulties before reaching the first target barangay.

ActionAid foodpacks stored at the Catbalogan City Hall under the care of City Social Welfare and Development Office of Miss Nida Aroza.